We took a trip to Shimla in the monsoon of 2015 to avoid the tourist crowd in summers and enjoy the misty greens of the hills. We also experienced our first toy train ride and that too amidst soft drizzle and beautiful Himachal terrain!

View of the Shimla Railway Station from the road above

Since our trip was a last minute plan we had to opt for a to & fro ride from Shimla to any one of the near station. After some deliberation we chose our destination as Ma Tara Devi mandir located in Tarav parvat. We had taken tickets for the Taradevi halt, but were advised by a gentleman to get down at Shogi and take a cab up to the temple. A sound advice in monsoon and for people who do not indulge in trekking. 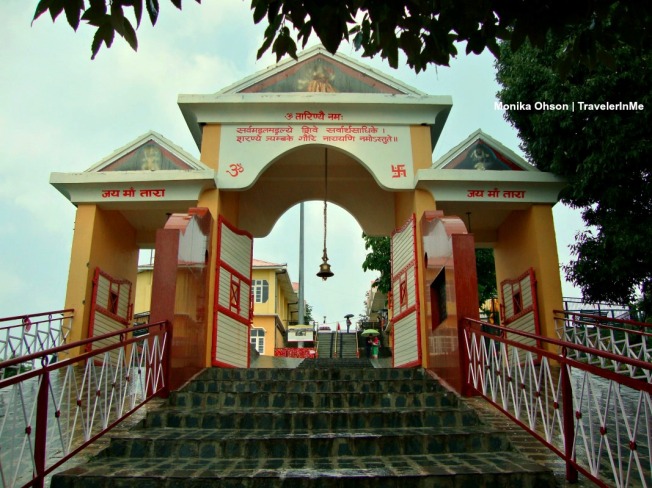 Entrance view of the Ma Tara Devi temple in Shimla

For a day to & fro train ride you need to be punctual, rather before time, to be able to get seats in the passenger toy train (Shimla Kalka Pass Ng Train – 52458 which starts at 2.47 PM) as most of it is unreserved. Since we did not check the timings we missed the morning train and had to wait for the next one in the afternoon.

The station has a canteen that serves simple veg thali. One can also buy some toy train related souvenirs from a little shop there.

The picturesque setting of the Shimla Railway Station

Our beautiful joy ride began from Shimla to Shoghi and while we chugged along, I sat back to enjoy the journey and nature at a leisurely pace. We had an interesting co-traveler, a local of Shoghi who had many interesting things to share that we may never find in any books / notes. The child like joy of seeing the train turn (now a rarity from the closed AC bogeys) and passing through numerous tunnels is captured in a couple of pics shared.

Chugging along hills and vales

The toy train runs on a 96 kms long narrow gauge track; passes through 102 tunnels (originally 160+) and; around 850+ bridges** and viaducts. I had to do a quick click with my mobile to capture this entry bit 🙂 The Bagot tunnel (No 33) just before the Barog station (from Kalka side) is the longest* and takes about 3 mins to cross.

We stopped at tunnel no 16 while driving down back home. There was a bhutta wala sitting right next to it and bhutta is synonymous with monsoon or hill chill 🙂

A ‘Toy Train Joyride‘ is a must do for all traveling to Shimla. If you plan well in advance, you can make the experience richer by booking the toy train right from Kalkaji to Shimla.

While waiting for our train to commence, we came across this sweet one bogey train at the station. Earlier we were confused, as from the front it can be mistaken for an engine. Later we realized we were staring at The Rail Motor Car. It is a train with a single coach. It looks really cute with just 14 seats and is the most sought after as its the only one in India. Its speed is also double the other trains on this track. Its glass ceiling offers panoramic views and it halts at only station, Barog.

The Rail Motor Car seen at the Shimla Railway Station

The most beautiful station of the Kalka Shimla route is the Barog Station. It is named after Col. Barog who had been given the task to make the tunnel through the hill with such accuracy that the ends meet. Unfortunately he met with failure followed by humiliation which led him to commit suicide. The unfinished tunnel is at some distance from the station and it is said that the Colonel has been buried there.

The Kalka Shimla Toy Train was considered the “crown jewel” of the Indian National Railways during British times.

….and, if you like what you just read, do ‘like it’ & ‘share it’. Non WordPress users please ‘rate’ it to express your appreciation 🙂 Also do not forget to ‘follow the blog’ to remain updated about newer posts ❤