From the Dolphin Nose

There are two ways to enjoy Coonoor. You can opt for a day visit from Ooty or you can stay there and indulge in slow travel. We opted for the former keeping in mind that it was our first trip to Ooty & Coonoor and we had just two and a half days in hand.

The first 1.5 days were dedicated to Ooty and on day 3 we were all set for the beauty and its rolling tea gardens. The to & fro journey, from Ooty to Coonoor and vice versa, was made on the UNESCO World Heritage Niligiris Mountain Railway’s toy train. We also had our cab aligned for the station pick & drop and sight seeing in Coonoor.

On the day of the journey, only my ticket had got reserved from Ooty. So while I chugged down the tracks on the toy train, my husband drove down to meet at the Coonoor station. I found the Coonoor railway station very picturesque with blooming African Tulip trees.

My husband could not resist the samosa being sold at a station stall. As for me, am quite cautious in trying a north Indian cuisine in south. Just to check if I am right I took a bite, and I was! There was hardly any stuffing in those mini versions and the mix had a typical southern tempering. He did not like it either but had no choice but to finish them!

Our first stop was the Dolphin Nose famous for breathtaking views. In November, light showers and mist can hide the views but then ‘nature’s secret is patience’.

The way to Dolphin nose is beautiful. The lushness of the tea gardens all around, as you move from one hairpin bend to another, is a sight to behold. Coonoor is famous for producing delicious Nilgiri tea.

Do watch out for the Indian Bison or Wild Gaur in the greens. If you are lucky you may sight them, like we did! Gaurs are endangered with only around a 1000 left in the wild. 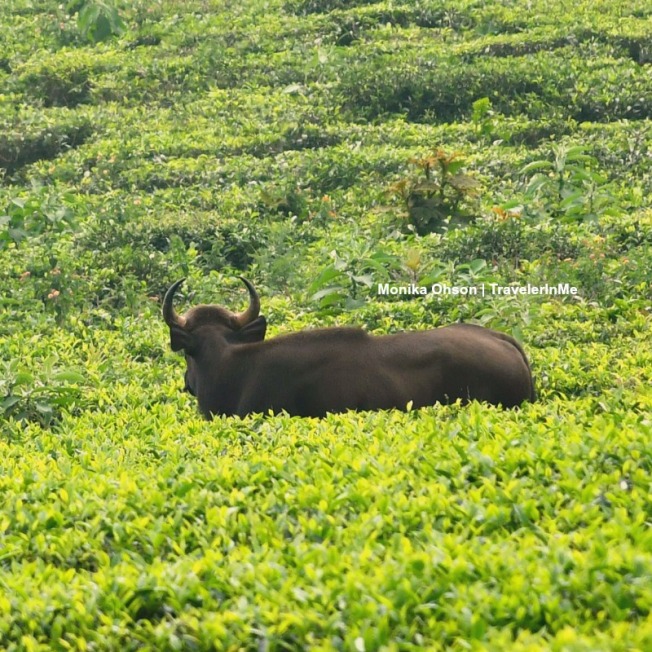 Too shy to show her face 🙂

The tip of the peak has a striking resemblance to a dolphin’s snout, hence the name. Can you imagine the spectacular 180 degree view you can get on a clear day! It was around noon yet a sheet of white mist surrounded it! 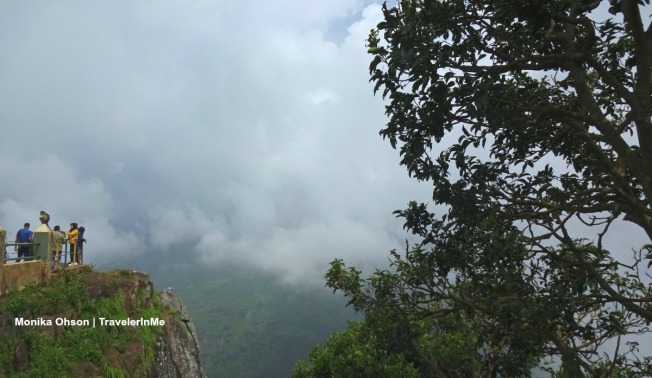 The peak is surrounded by a heady mix of tea estates, forests, valleys and ridges of the Nilgiri range. 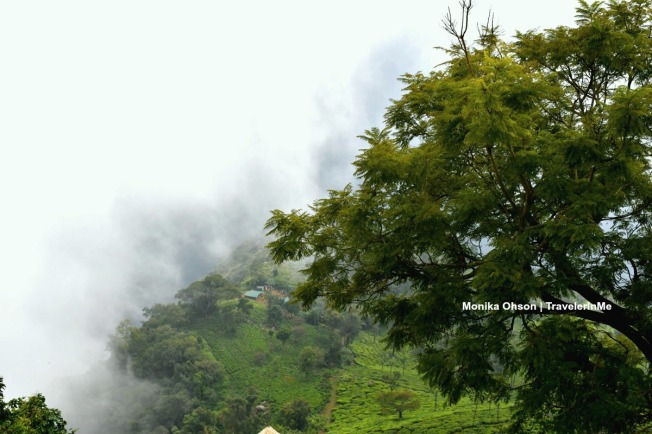 This is the best place to see the spectacular Catherine Falls. A stunning waterfall falling from an altitude of 250 feet. The fall is named after Catherine Cockburn, the wife of M. D. Cockburn, a Scottish coffee planter who introduced coffee plantation in Kotagiri. 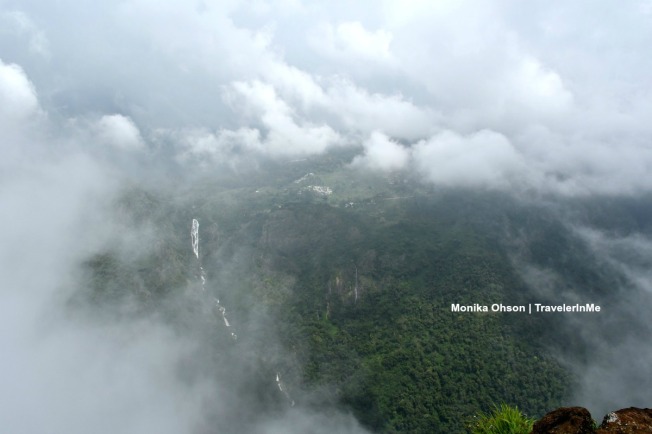 The beauty peeps through the sheer misty layers.

If you like adventure, you can trek to the falls. If you are staying in Coonoor, an excursion to or picnic at the falls would be a good option.

Zooming on the Catherine Falls

Mid way to the Lamb’s Rock we decided to drop it as mist & drizzle were playing spoil sport and we had a train to catch at 4 pm. So our next destination was the Sim’s Park. En route we stopped at a tea garden with a fantastic 360 degree view. 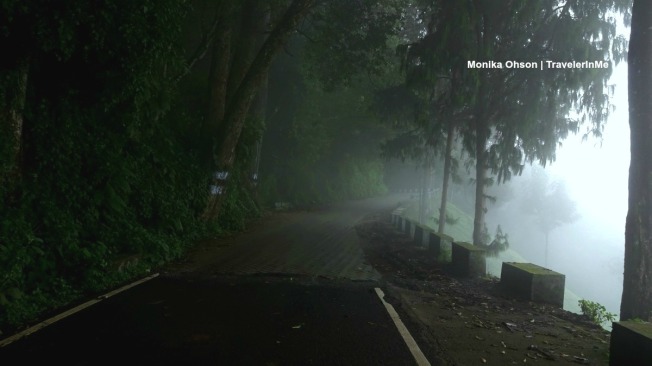 The road leading to the Lamb’s rock from Dolphin Nose

We stopped at this point, somewhere in between Lamb’s Rock & Dolphin Nose, to catch the glimpse of yet another waterfall. Apparently the waterfall can be sighted here in full grandeur and cannot be viewed from the Lamb’s rock as its in the drop below. 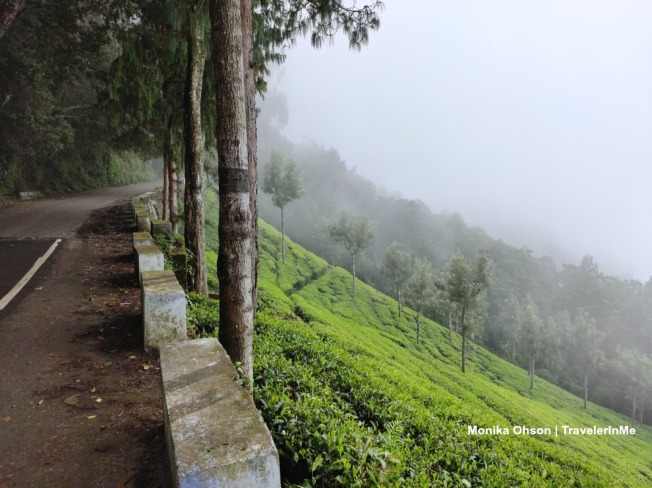 We soaked in the tranquility and the fresh misty surroundings. The fog and clouds refused to go away, so after a good 15 mins wait we decided to move on. 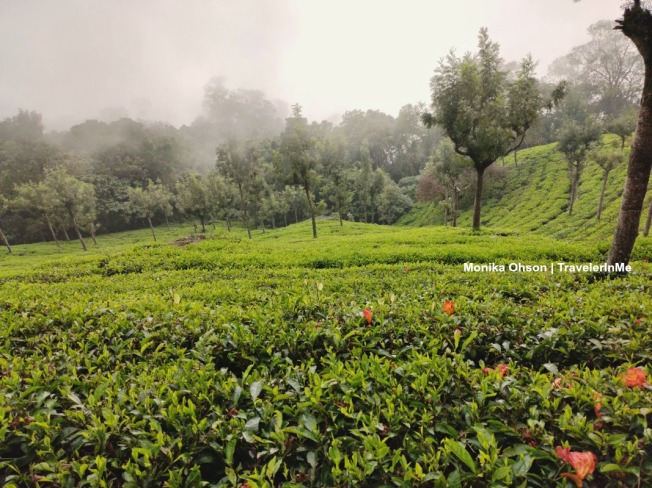 One of the numerous tea gardens in Coonoor

We reached Sim’s Park and it’s first view gave an impression of an extremely clean and beautifully landscaped park. Sim’s Park was developed around natural landscape thus you will find a brilliant mix of indigenous trees and plantations along with some species uncommon to the region. 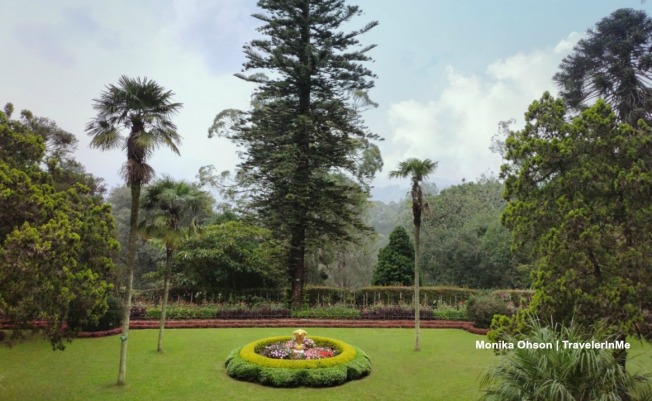 The view that welcomes you to Sim’s Park

The 146 year old natural garden has a layered structure with flower beds, long paths surrounded by tall trees, shrubs and ornamental plantations. At its lowest level is a children’s park along a man made water body with boating facility. 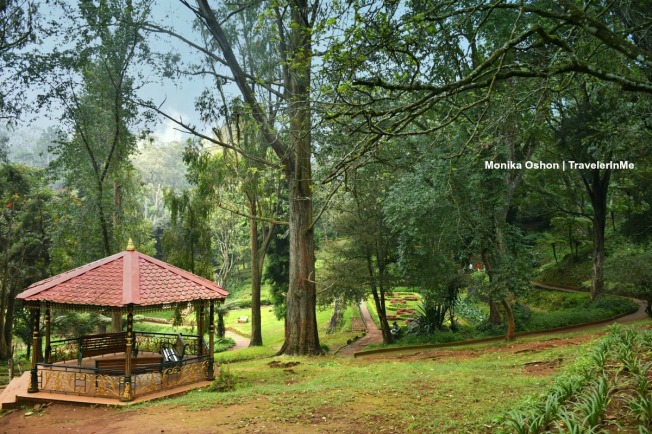 A view of the naturally landscaped park

Its a delight walking through such quiet green pathways

I was enchanted by the numerous colorful flower species there, especially the Azalea flowers, in striking colors, extensively used in landscaping. I will share a separate photo post on the flora and avifauna of Ooty & Coonoor soon. Do watch out for the visual treat. 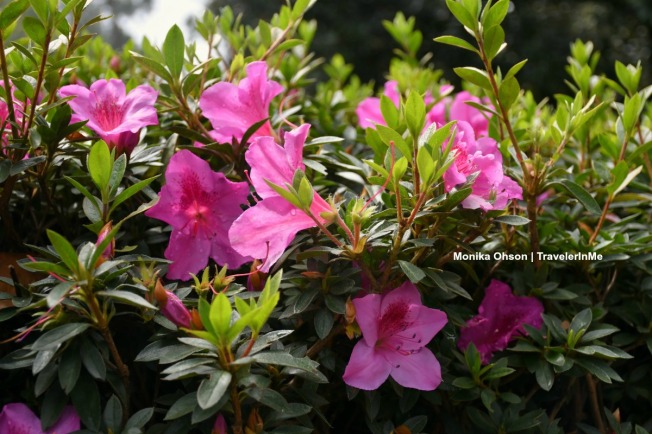 The Azalea flower is a symbol of femininity and of softness

A glasshouse in Sim’s Park

The Sim’s Park is a good birding spot. To sight the birds you would need to go there early in the morning and much before the crowd starts pouring in. I managed to capture a few of them in the afternoon, so I can imagine the opportunities in the morning.

A pretty waterfall within Sim’s Park

The park host’s the annual fruit and vegetable show in May and this attracts a lot of locals and tourists alike.

“.………exhibits made of fruits locally produced in the villages surrounding the Nilgiris, as well as at the Pomological Station in Coonoor, which is renowned for producing fruits from trees both native to this region as well as from other parts of the world……” Source: The Hindu, May 2019 issue

This is what we did in around 4 hours that we spent in Coonoor. Whatever I saw of Coonoor, I loved it. Its a place for nature lovers and those who just want to rejuvenate in peace.

Coonoor is the second largest town in the Nilgiri hills after Ooty and is a perfect place for slow travel, especially for those who love nature and birding. I know it means I need to plan another trip accordingly!

Yet another waterfall (en route to Coimbatore from Ooty; somewhere around Coonoor)

You may like to read about our experience of Ooty, Isha Yoga Centre & Adiyogi:

….and, if you like what you see & read, do ‘like it’ & ‘share it’. Non WordPress users please ‘rate’ it to express your appreciation. Also do not forget to ‘follow the blog’ to remain updated about newer posts!