“The most important reason for going from one place to another is to see what’s in between,
and they took great pleasure in doing just that.”

Panoramic view of the Udhagamandalam railway station — platform, tracks and the toy trains

While planning the trip I was quite worried about the toy train ride since I wanted to do the reservations online and avoid the early morning queue and tension of on the spot booking. The leave from office was still not sanctioned yet we decided to go ahead and book. We managed to get waiting list tickets in the First Class and now it was in God’s hand.

View of Udhagamandalam station (blue building) from our stay – RTOHH

We had 2.5 days for Ooty & Coonoor and 1.5 days for Isha Yoga Centre near Coimbatore. The to and fro toy train ride between Ooty and Coonoor was slated for last day at Ooty. Our wait list was moving closer to the confirmation slot but we would only come to know of our luck 4 hours before departure time, which meant around 5 am. We did our optional planning for all possible what ifs.

How to enjoy the charm of Ooty in 24 hours
Amidst mist, tea gardens & waterfalls in Coonoor
My first visit to Isha Yoga Centre

Let’s start our virtual journey together

I do wake up early but as a precaution set the alarm. The morning did get us ‘some’ good news; some because only my ticket got confirmed. So as per optional planning I went by train and my husband drove down to Coonoor. We did try to get him a seat but I guess I was meant to take this ride alone.

At the Udhagamandalam station

The train is painted in blue and cream, with rustic wooden coaches. My seat was in the last compartment just after the guard’s room. It also meant I had the rear view as well. I had got the window seat and that was a thankful moment. Since I love photography it was much needed. There was a sweet family in my compartment but a really boisterous group of youngsters was just behind us.

View through the guard’s room

View from inside the compartment

The train chugged on and we tracked through beautiful misty views of the Nilgiri region. It takes about 1 hour 10 mins from Ooty to Coonoor with a few halts at Lovedale, Ketti, Aravankadu and Wellington in between.

Interesting trivia on some station: Wellington is a cantonment township famous for the renowned Defence
Services Staff College (DSSC); Ketti houses the Pony Needle Industries (India); In Aravankadu we have the historical Cordite factory which is one of the oldest defence factories; Lovedale is famous for it’s Lawrence School 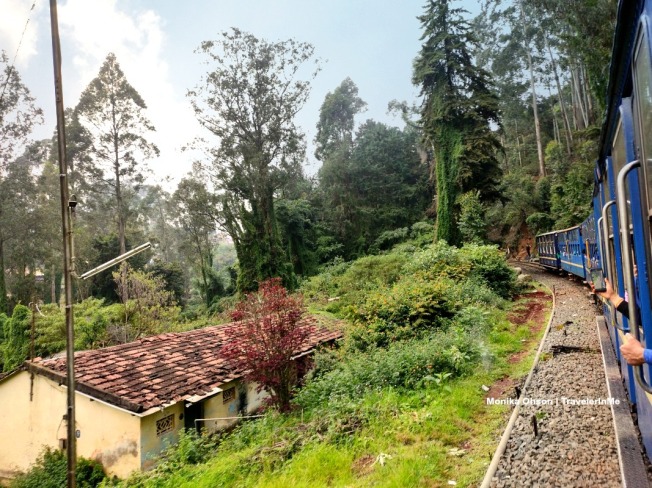 Sometimes its the journey that teaches you a lot about your destination.

The fun of sitting in the last compartment; you can enjoy the front and rear view.

The compartment could seat 8 people and had four huge, open windows from where one could lean out. Through out the journey someone or the other were half out getting clicked or recording their fun. The door has a huge fixed glass pane. The window pane is to be slid up and there is a wooden knob that needs to be adjusted as a pane stopper.

Scene from one of the many villages we crossed 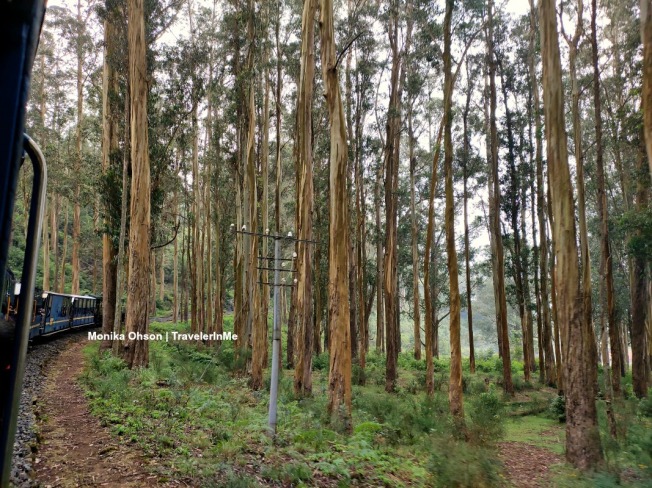 A walk, no-no…… A ride, through the woods brings the soul home

The weather was still cloudy with on and off sudden light showers as it happens in the hills. The rolling greens of Nilgiris and colorful houses popping here are there is a sight to behold. This was my second toy train ride, the other one being on the Kalka Shimla Toy Train from Shimla to Shogi during monsoon. Both are hilly terrains but with different topography which makes each experience unique.

Trivia: Making of Shimla Rail Route
Back to being a child on the Shimla Toy Train Ride

I think I have captured every turn ….. hahahaha

Track neighbors ………. The blue color stands out for sure

Tea gardens here and there all through the journey

Chugging along beside the road 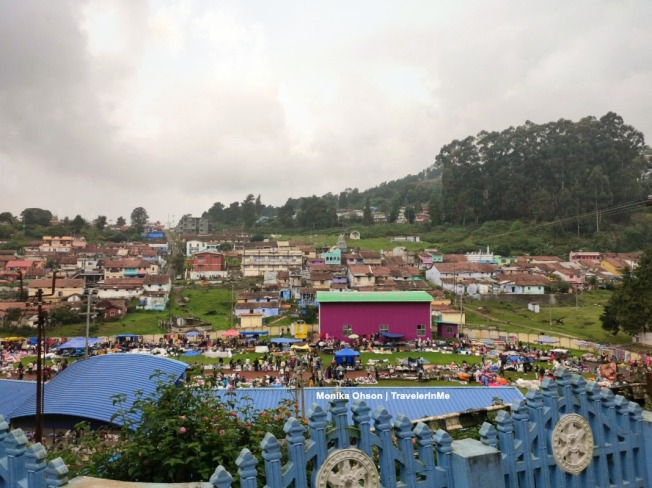 “Get aboard a Moving-Hooting-Rumbling grand piece of history!” 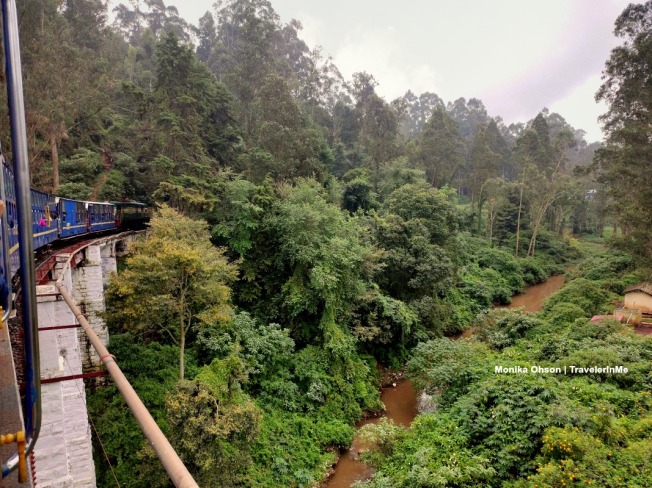 Crossing the viaduct near Wellington

The train was punctual, running as per its schedule. When we reached Coonoor the train crossed the station and it got me wondering what happened. But then, it began running on reverse which means we were now in the front from the earlier rear position. It was sheer fun. It’s all there in the video shared, did you watch it?

The stone built Coonoor station is picturesque one. The African Tulip flowering trees adds so much charm to its quaintness. My husband was already there to receive me and I was happy to see him like a teenager in love.

Standing tall against test of times since 1908. The (Nilgiri) blue colored Coonoor station

Our return journey seats had got confirmed and after lunch we sent off our hired cab to receive us at Ooty station. The train was scheduled for departure at 4 pm. We had reached the station slightly early and took the opportunity to look around.

Still from the Coonoor railway station

“The path of a good woman is indeed strewn with flowers; but they rise behind her steps, not before them.” The scenic Coonoor station

“Nilgiri Queen”, one of the many steam locomotives. Their age varies between 50-80 odd years.

A few captures from the Steam Locomotive Shed in Coonoor.

For special occasions. But no answer to how to do its reservation. 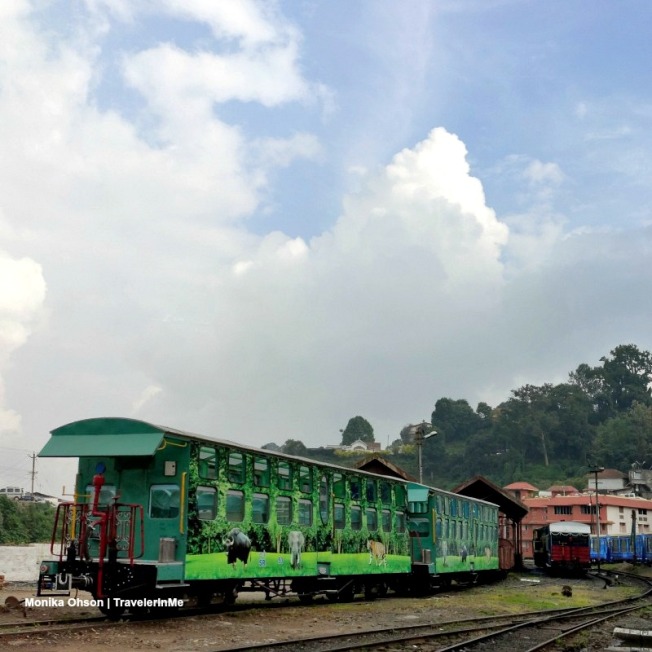 For official use I was told, Its beautiful with glass roof and big open windows

Our bogey was half full. We had some chilled out elderly couples travelling together and a young couple with a small kid as co passengers. During the journey we had shifted to the empty compartment and both, me and my husband, hung around our window seat!

While on a journey don’t forget to enjoy the view. The kid is peeping out of the door window.

The windows in this train were different. I was looking for the stopper but could not find any. For a moment I felt sad that we would have to look through the stained window panes. After a little R&D my husband understood the mechanism. The pane was in its place with a slight incline resting on the wooden frame. It had to be lifted slightly and slowly slid into the hollow section of the solid frame below. Not only that, the compartment had huge windows all around including on the doors that could be opened similarly. Now this was real cool but we decided to let the ones behind us remain shut. Sounds fun, right! One can imagine the engineering capabilities of those times. Their workmanship has stood the test of times. Even after 112 odd years all of it intact and functioning properly. 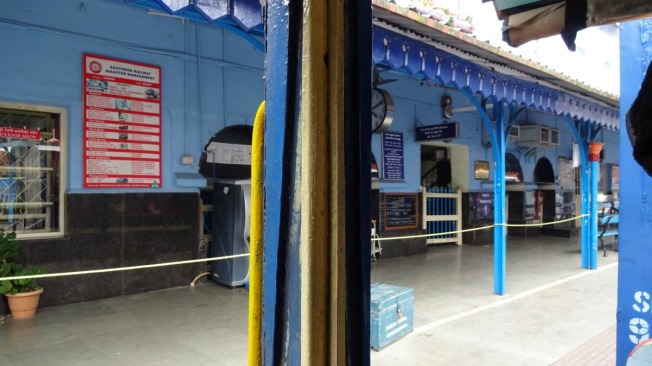 The side and the back window —- all open 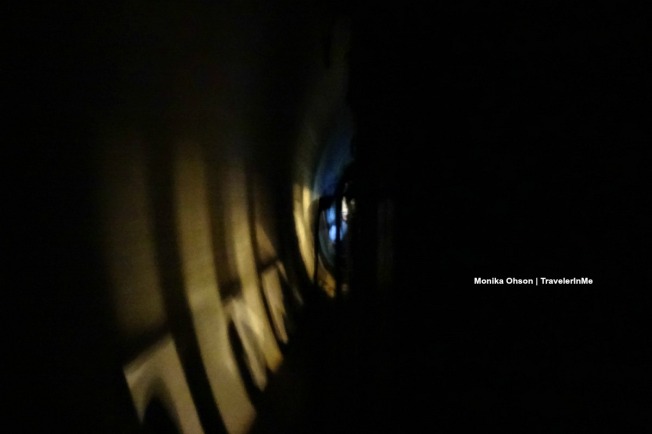 Passing through the tunnel

There is light at the end of the tunnel.

The journey was fun with slight showers in between. We reached Ooty and our car drove us back to RTOHH. The next day we had to leave for Isha so we strolled around the Charring Cross market place for the final time that night.

The Udagamandalam railway station (outside view)

Quick fun & informative facts:
— This mountain toy train is a UNESCO World Heritage Site along with other toy trains of Shimla & Darjeeling.
— It is the only meter gauge rack and pinion system railway in India
— Nilgiri Mountain Railway has the steepest track in Asia
— It covers the longest distance, 46 kms, compared to other mountain railways in India (Darjeeling and Shimla)
— Historical steam engines ply on the rack section between Mettupalayam and Coonoor. From Coonoor diesel engines take the trains to Ooty. The latest X class locomotive is 50+ years old, and the oldest one is 80+ years.
— It goes through 16 tunnels, 208 curves and across 250 bridges. (Mettupalayam to Ooty)
— The train, is still the way it’s Swiss inventor Riggenbach had designed; the original blue and yellow paint is still there and so are the bench seats without cushioning except in the First Class coach
— Near Mettupalayam station you will find the longest rail bridge (across river Bhavani)
— It is famous for its movie connection like; the train was featured as Marabar Express in David Lean’s movie version of E.M. Forster’s A Passage to India; the famous Bollywood song Chaiyya Chaiyya song featuring Malaika Arora & SRK from the movie Dil Se was filmed on top of the NMR train
— It’s better to reserve seats online at least 2 months ahead. If booking over the counter then its advised to buy the tickets a day before. Same day reservations is also there but then you need to be there very early to queue up.
— There is no catering on the train so if you are on long hours trip do carry your own food.
— There are no toilets inside the train….. so be prepared accordingly 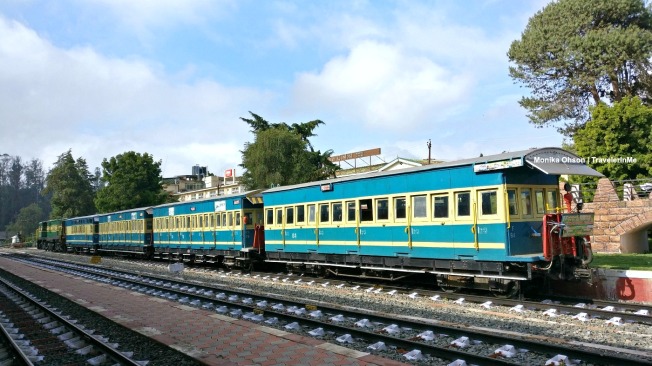 ….and, if you like what you see or read, do ‘like it’ & ‘share it’. Non WordPress users please ‘rate’ it to express your appreciation. Also do not forget to ‘follow the blog’ to remain updated about newer posts.

This published post is being shared as part of: